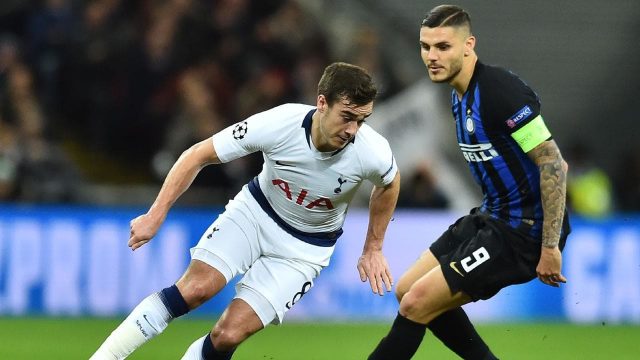 Yesterday evening I was luckily able to see our boys fight for qualification to the round of 16 in the away stand at Wembley. I’ll try relay some of the emotions and atmosphere of the night, along with some less heated post-match reflections. I knew it would have been a great experience regardless of the result. And indeed it was but, unfortunately, not because of the result.

So let’s get that sorry matter out of the way first. The disappointment was palpable in the away sector after Eriksen’s 80th minute winner, and as the rest of the stadium rose to cheer and the minutes ticked on towards the final whistle, disappointment mixed with anger and frustration for a result that was probably the worst possible one. In fact, a 1-0 loss takes qualification out of our hands: we will have to hope that Spurs doesn’t beat Barça away or else we’re out, no matter the outcome of our match with PSV. That certainly sounds terrible, considering we were ten minutes away from qualifying a game early, but we must also remember how most of  us probably expected to fight with PSV for the Europa League spot after the groups stage draw. Our impressive performance in this hard group is what allows us to still be in full contention for qualification on the last matchday despite the loss in London. So let’s not despair and keep supporting the team: it will be all to play for at the Meazza on the 11th.

The specific nature of the result, though, also encourages a brief comment on the match itself and our performance. I’m not sure to what extent Spalletti’s intention was to play for a draw, but if was evident that our approach was more defensive than, for instance, the Spurs match back in Milan: then it was us who pressed high and tried to disrupt Tottenham’s low build-up, yesterday they did the same to us. Usually I don’t complain about defensive displays, indeed I’m a fan of some well-executed catenaccio, but in this case it was an extremely risky approach, as giving up a single goal would have led to, and did, to the worst possible result. A 2-3 loss for example, a possible consequence of a more offensive approach, would have put us a win with PSV away from certain qualification, and 2-1 one loss would have also given us a better chance to qualify through goal difference. In other words, perhaps counterintuitively, a more attacking approach would have been the best way of defending our advantageous position going into the match.
Still, I don’t think we played terribly: the defence was mostly solid and I think a lot of the problems we had in the first half were up to the misplaced passes and low intensity of a not fully fit Nainggolan; indeed we improved greatly with Borja in the second half, with the Spaniard possibly being our best player on the night. Therefore I think starting Radja was Spalletti’s biggest mistake: sometimes his love for this player may go too far, even though the blame should be shared with the medical team for this one. His second-half subs were also unconvincing, and may have contributed to the lack of a strong reaction after the goal, although tiredness also played a part.

More than anything, though, I believe Inter suffered from lack of international experience at this level. I sensed come nervousness in the team’s play that led us to fall back on the security of our defensive tenacity, which was itself betrayed by a momentary lapse in concentration when Sissoko ran into our box unchallenged. At this level, though, you can’t afford any such lapses at all, and being able to maintain constant concentration is part of the process of building up European experience that our squad has, unfortunately, only just begun. We were able to over-perform when we were the underdogs and the pressure was on our opponents, such as in the win and the draw we got in San Siro in this Champions League campaign. Once we had the advantage, though, the pressure weighed on the players’ shoulders and it was felt: we were unable to deliver the killing blow in the decisive moment. What I saw and experienced in the stands, though, also reminded me how it is exactly in these occasions that such experience is built and developed: the tension among the fans was enormous, as palpable as the disappointment after the goal, and I can’t help being glad that Inter is back playing these sort of matches, high-stakes mammoths that the fans and the club had been starved of for too long. So let’s end this on a high note, rather than brooding over catastrophic predictions, knowing that competing on this stage is a crucial part of our process towards renewed success and that we will return to this stage to give it our all in another decisive match in a couple of weeks.

Inter Worldwide is a multimedia entity and news service company focused on creating engaging content to Inter fans all around the globe. The company comprises businesses across a range of media, including: news, information services, videos and podcasts.
Contact us: interworldwide1@gmail.com

Darmian “I am always ready to score”

Gosens “Can’t wait for the derby!”